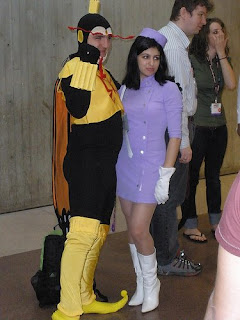 Little did I know what we (the Monarch and I) were in for at last year's comic con. Neither of us had ever been, but were very excited. We had a mission, to hopefully meet Doc Hammer and ask him to perform our marriage ceremony.

I can't really remember how the idea started, but we thought it would make for a fun wedding. Our day started well before the break of dawn and included a 2-hour train ride into the city. We traveled half-dressed, and I finished assembling us while we waited on the line to get in.

I was a little nervous, I didn't see that many costumes at first, and people were just staring. Then the photo-taking started. Must have been the first of what seemed like hundreds for what followed.

There were many highlights to the day. People were super supportive and thrilled to see us. I really was not expecting the warm response and was thrilled to pose for photos. Though, things got a little strange when people started asking us to act out little scenarios, but I had a blast.

I was also very impressed with what I saw. People were dressed up in all sorts of awesome costumes, some of my favorites included; female Punished, Blade, Ghostbusters, Batgirl, and oh of course Mr. T. The guy dressed at Mr. T. was a friendly cool guy and I'm sad to say I never got to see the photos of us and him. If you're out there Mr. T.......

We were lucky enough to have a great wingman with us who was willing to carry some of our stuff and fetch us some food. As we were about to have such a snack out on the concourse we heard another exclamation of someone wanting to get their picture taken with us. Much to our elated surprised, we found ourselves face to face with Seth Green! 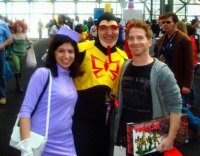 I was so excited to see him. I certainly just stood there dumbfounded and stuttering (so cool, I know) but he took a picture of us on his camera phone. We felt like the two coolest muthas at that point. How could the day possibly get any better?

We only managed to attend one panel. Something about superheroes and literature. As far as I knew we had read one of the few books out there on the subject, Soon I Will Be Invincible,
but the panel was about a new collection of short stores that was yet to be released. Imagine my surprise when one of the people asking a question at this particular panel was none other then Austin Grossman. I thought he seemed a little miffed to be in the audience asking questions at this panel, rather than being questioned himself. Nonetheless the little group I was with nearly fell out of our chairs, all of us having read his book. We even got to speak to him after the panel.

The best was still yet to come. With the long-awaited Venture panel only a few hours away it was time to queue up. We saw already waiting on the line was another Dr. Girlfriend and a Lady Au Pair. The spirit of the crowd was great. Soon the line snaked around the hallway and there were people everywhere. As we waited in a little cluster one of our friends was shoved out of view and wouldn't you know it, Seth Green appeared in her place. He told us that he showed the picture he took earlier that day to Doc and Jackson and the were psyched. And then he was gone. The whole thing took about .7 seconds. He is fast. A fan on line in front of us commented that we had our very own celebrity stalker.

As we waited to get in the umpteenth person of the day asked me to the famed Dr. Girlfriend voice, I later figured out he was Michael Sinterniklaas, voice of Dean Venture. Then Doc Hammer walked by us, he looked Peat up and down and commented 'very nice.' It would have been enough to stop the day there, but the panel hadn't even started yet.

Once the panel got underway and the Q & A portion started we were a little worried. The moderator was behind a podium and couldn't see the Monarch stretching his arm up like a school kid. But luckily, Doc Hammer could see us, and suddenly he interrupted the moderator, "I wanna hear from the Monarch!"
My Monarch stood up and the crowd roared, it was overwhelming. All the crowd around me were whispering, 'stand up, stand up!' So I stood, and you probably saw the rest on the video footage...


I was able to give Doc the wedding invitation that I made for him, and the pin that I brought for Jackson. I felt bad that I did not have anything for Michael Sinterniklass or James Urbaniak! I did not know that they were going to be there. Well, I was not expecting to get prized from Doc H. I received a Tony Bennett DVD that included an him being interviewed by Clint Eastwood, and the Monarch received a juvenile's historic fiction book from the National Treasure series. Take that all you people who got lollipops!

I'm very glad that I did not trip or fall when I walked up there. After I headed back to my seat, at the behest of Doc saying, 'ok, go sit down sweetie' in Dr. G's voice, I near passed out. Seriously, I could not recall a thing that happened in the panel after that.

After the panel, things with the crowd changed for us a little bit. Soon, all these strangers were coming up and congratulating us on our engagement. Also, all the strange photo requests stopped. We met up with some of the other people in the crowd dressed as Venture characters, one of a few totally adorable Trianas. 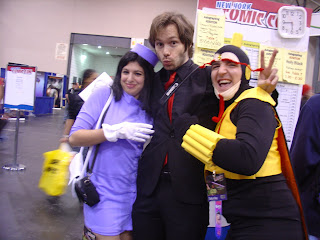 But we did not dawdle too long, because the Venture Brother signing was beginning upstairs. So, we eventually made our way to that quque. Again, we meet some wonderful fans, most of whom wanted to attend our wedding in full Venture regailia. We also got to have a nice chat with Mr. Sinter-Sintersdksss, oh you know who.

Time for the day was running out, but Peat got our Venture calendar signed, and before we knew it the day was over, and we were being ushered out.

Slowly we removed a few costume pieces, changed shoes (my feet made me pay for a day of abuse atop 4 inch heels) and reluctantly collected our coats and made our way back to the train.
A day we won't soon forget.
Posted by anigswes at 6:55 PM