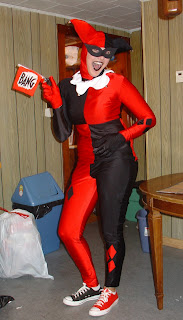 This was another costume I had it in my mind to make for a long time. Many times I feel that I have to have a special affinity with a character to wear it, and while I was very fond of Harley, I didn’t think I could be Harley…….my friend Nikki on the other hand, she is Harley. She mentioned that she always wanted to dress up as her….and that was it, I was on the case. What’s more is Nikki had the same love for Halloween that I did, and she decided to throw a costume bash for her birthday in late November. I had a mission and I accomplished it quickly, I think I made this costume in about a week to 10 days.

Instead of making a bodysuit, I made her a bottom and a top. Bodysuits in general take a more detailed fittings, and this was on the clock. Also, the I-have-to-pee factor in the middle of a crowded party just begs for ease and simplicity, and few people I know would argue for the bodysuit over separates. The other thing I find is when I’m making something for a friend they are not nearly as particular to the details that I am. As long as the overall effect is achieved they are pleased.

I made the cowl out of my standard hood pattern with some modifications to make it fit very snug. I stuffed the ‘arms’ with fiber-fil to make them stand out, and still be light. I added bells at her request which she jingled around all night and drove everyone crazy. I put bells on the collar too, which was held closed with Velcro (more ease and simplicity).

The gloves were not as detailed because I was using the oh-so-forgiving stretch of spandex and that is when you can get away with making glove patterns out of someone’s traced hand.

Then there came the question of Harley’s shoes. Harley appeared to wear different colored elf-like booties and I did not know where to get those on such short notice. Nor did I want to begin trying to figure out how to make them while short on time. I thought about Nikki, she was playful and always had a lot of sneakers, not just sneakers, but adorable playful converse sneakers. I asked Nikki if she had an old pair, so she painted them red and black to complete the ensemble. She found the “bang” gun on ebay (thanks again ebay!) and we were set for the best party any of us had ever been attached to.