I was doing some editing work on the blog, and found that somehow my Batgirl post had been deleted!
So, here is a different version: 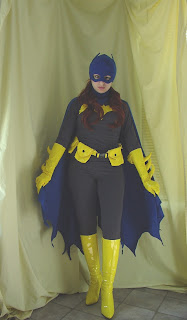 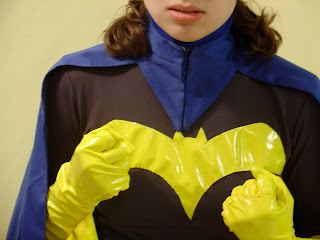 This costume is based on the Year One comic, because I really like that version of Babs. This costume was made several years ago, but continues to evolve. 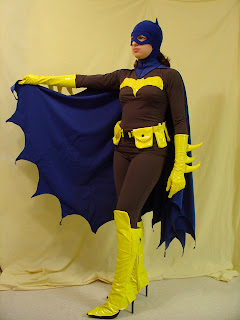 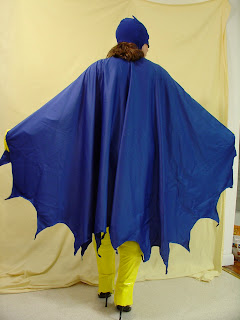 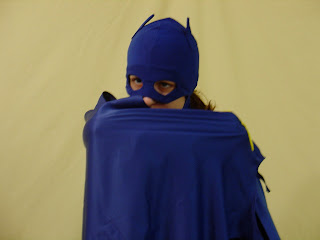 Yes, I am silly.
Originally when I made the costume, I could not find yellow boots that I thought were suitable, so I made boot covers with the stretch vinyl.
I found that working with stretch vinyl to be something of a nightmare. First, it is difficult to sew on with your sewing machine. You definitely need to use a special presser foot, such as walking foot, or ultraglide, or roller foot, so it will feed through the machine properly and not stick. You also need to make sure that your stitch length is not too short, otherwise it will just tear the fabric.
I had a lot of frustration with this stuff and did a lot of sewing by hand. The gloves took a long time, and seam allowance for them was a mere 1/8" so it was necessary to do it by hand.
The gloves were very snug around the forearm, perhaps a little too snug. For whenever I took them out of storage, I found that the upper layer of yellow vinyl was peeling away from the lower spandex base. This happened on most anything part that I had stretched.
Another note about vinyls in general; I also found that my utility belt had several black spots on it. I hadn't stored my costumes well, and something black had rubbed off on the yellow vinyl. This is a common occurrence, and when I examined everything closer, I found several more spots. Vinyl will "suck up" the color of something that's touching it, and I have not found anyway to fix it.
Some additions to this costume have been the red wig, yellow gloves made out of spandex that do not extend above the wrist, real yellow boots, and a new utility belt made out of heavier vinyl.
I do not think I will use stretch vinyl for another project. It is more expensive than spandex, and does not stretch nearly as well. For all the cost and frustration, I feel that you will most likely end up with a garment that will not last. I would advise using it sparingly, or on areas that will not be under a lot of stress.
Posted by anigswes at 12:09 PM