So, I've had a very interesting week.
A few weeks ago, I answered a call to be a extra on HBO's Bored to Death. The filming was during this past week in Brooklyn. Luckily, we have a friend in Brooklyn who was good enough to let us crash, so we could be as close to the set as possible, since we were looking at 10+ hour work days (only 2 days).
So, any pals I made on the set that have any pics, please let me know! You can always forward your smartphone pics to me at: anigswes @ gmail.com
Probably the best part about this was that they wanted to pay comic fans, who owned their own costumes to wear said costume on the set of their fake comic convention. I, the hubby, and our friend all got to go, and we were all dressed by me!  Well, what I mean to say is, Batgirl, the Monarch and Sinestro jacket all got to be on camera. I changed a few things from those linked entries. My original Batgirl utility belt and gloves were kinda falling apart so I replaced them (no more stretch vinyl!) and The Monarch needed some work, especially because hubby gave the original gauntlets to the creators of the show. So, those original gauntlets are where? In a dumpster? In an intern's kitchen? In the toilet at Astrobase? One may never know! Anyway, so I'll have blog entries on a few of the replacement pieces soon.
Well, I'm not certain what I can say about the show, other than it stars, Jason Schwartzman, Ted Dansen and Zach Galifianakis. Other important names include the shows creator Jonathan Ames, and comic book artist Dean Haspiel. All this people I got to stand really close to, or walk near!
Yes, most of the working days were spent in the holding room. The first day was actually very uncomfortable because the temperature outside was more than 80 degrees, most everyone was wearing head to toe spandex or worse. Being on set was still exciting- there are more people than you can ever imagine working behind the camera. There was so much equipment, and the camera looked about as complex as an alien spaceship. Of course there was a lot of waiting around time, and the camera only seemed to roll for merely seconds at a stretch, I'm not certain how anything gets filmed to completion.
It was a very strange group of people, we had not only comic fans, and cosplayers, but real actors, real comic book artists thrown into the mix, one was never quite sure who they were talking to! On top of that, so many people were so hidden by their costumes, that you would never know them out of it! (I'm talkin to you, Power Ranger!) So, what did us extras do besides wait around and vamp in our costumes for each others' amusement? We did a lot of pantomiming, and walking through shoots, or to other areas within a shot. Simple, right?
Overall, it was a crazy, exhausting, sweaty experience, am I'm glad that we did it. AND I'll be holding my breath hoping that my 3 garments got lots of exposure in the episode.
I'll update again when it's going to air.
Even though we were banned to have cameras, I did manage to get a cool souvenir. 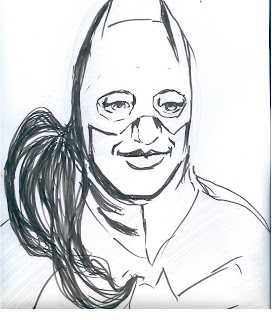 Thanks John!
Well, life a superhero HBO extra is not as glamorous as you would think. I'm just like everyone else, and today happened to be laundry day...... 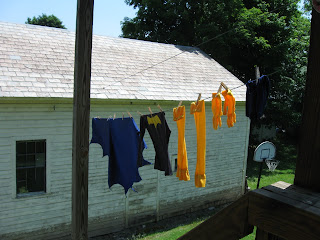 Posted by anigswes at 8:41 PM No comments: 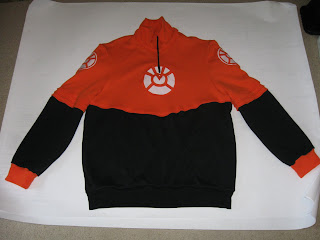 Larfleeze translated into a pullover. I've been wanting to do this design for sometime. I searched for awhile for an orange that I liked, and I finally found this. 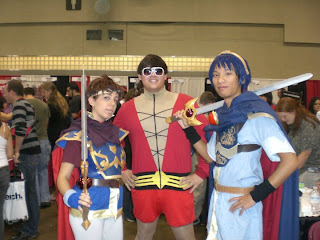 Oh, I've been gone for awhile- but not due to loafing- been busy! So, here's a project that I was sure to make at some point in time. Guy Gardner.

You know he's got an interesting wardrobe. This is what I was what I was able to do with it: 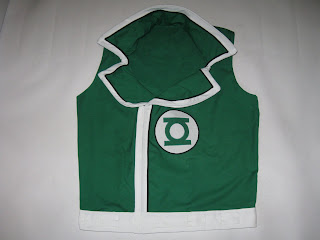