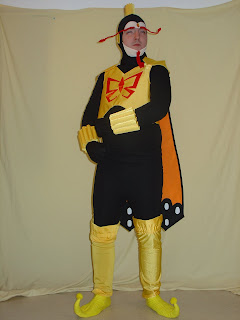 When my fiancé Peat first showed me this cartoon, I was very confused, (why is that guy a giant butterfly, and why is his girlfriend a man, and are those two young boys retarded??) but after a few episodes I was hooked! Season 2 was even better and the eternal answer of what would be a great couples’ costume for Peat and I to wear was solved. Where we were going to wear this to was yet to be determined.

After plenty of sketching, pausing, scanning through the DVDs, decisions had been made, and soon I was bothering my poor monarch with fittings left and right. I believe I started monarch production early fall 2007, I started at the crown, and the cowl and worked my way down.

The crown has cardboard inside to make it stand up. The beard and eyebrows are pipe cleaners and attached to the nude swimwear lining, so we wouldn’t have to depend on attaching those accessories directly to his face. (I’m a sewer, and avoid big make-up jobs when I can)

The armor for the chest and shoulders is made out of the spandex and stiffened with some heavy interfacing. The symbol is vinyl and was attached with a heat press.

Again, with this costume for comfort and simplicity’s sake I made two pieces instead of a one piece bodysuit.

I purchased the yellow booties from a costume website and made thigh hi extensions out of the corresponding fabric. (There are a lot of pieces in this ensemble!) The gloves are just those black little stretchy gloves you can buy anywhere, because I forgot to make real ones, and ran out of time just before the con. The gauntlets are made out of the yellow spandex stretched over 6” lengths of ½” pvc pipe. I’m going to need to remake these too, because Peat gave them to Doc and Jackson 2008’s NYCC signing. (more on that in another post, I swear)

Those were difficult to make, because obviously I couldn’t put it in the machine after I got the piping in there. It was a pain, and the insides of them did not look so pretty, but the overall effect was what was needed. Peat was a disappointed they couldn’t actually shoot darts, but who knows, maybe the next pair. I have big plans for the next set, but I shall require some new hardware to achieve the new plans.

The wings were fun to make. First I started with a paper pattern so we could determine the exact size and shape. They are made out of cotton and stabilized with medium weight interfacing. I made the black binding in order to channel the plastic boning to help keep the shape. They are attached to the armor with a series of complicated snaps that I can barely remember the proper sequencing.

This was a truly a labor of love, and I had a blast making it. Little did I know the extent of what I had done, until we went to 2008 New York Comic Con.