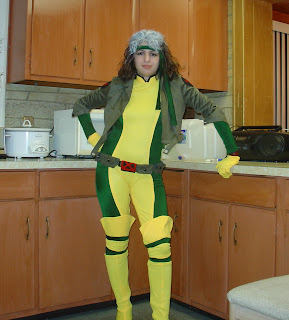 This was a costume I wanted to make since I watched the X-men cartoons, I even have some pre-teen sketches that I made way back when. Actually, I wanted to make most of the women X-men costumes, but Rogue the most, and Storm the second. (I didn't like the idea of wearing that much white, but cool shoulder pads and cape were awesome!)
For the bodysuit I made the pattern out of a sloper a derived from the Batgirl pattern. I made a mock up out of some clearance fabric from the garment district so I could plan and mark out the precise points of the yellow-green color change. The whole bodysuit is actually entirely green, and the yellow is an overlay. I did this for two reasons, one it was easier, and two the y 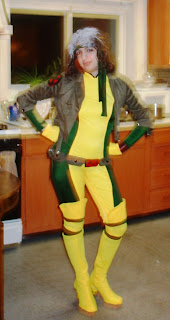 ellow is see-through.
I had a pattern for the jacket, and just cropped it and added a belt, cuffs and epaulets. The utility belt pockets was made the same as batgirls, I just covered the parachute clip with a removable felt “X” symbol.


I was still having the yellow boot trouble at this point, so I made fabric boot covers which looked just right.

To achieve the effect of the boots standing up and away from her thighs I made kind of a knee pad with elastic to keep it in place. In the extension I put buckram inside the yellow funnel part to make it stand up. I was very pleased with the result.

The gloves were made by hand, while I rode the train to work using the same glove pattern and adding the cuffs that were required.
I made Rogue’s earrings by covering ‘80’s style earrings with fabric scraps.
A lot of pieces for this one, but I think it took between 3-4 weeks. 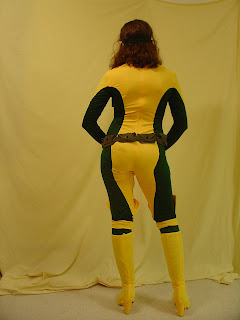 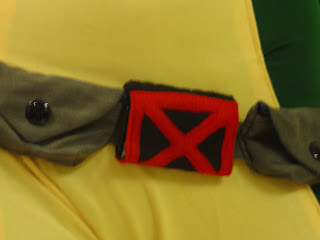 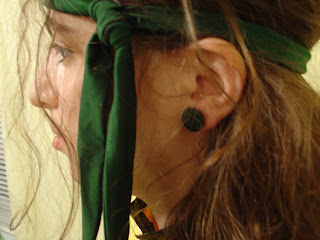