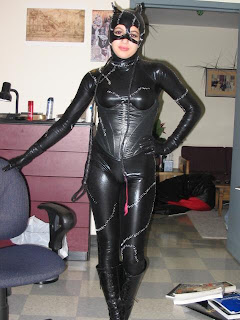 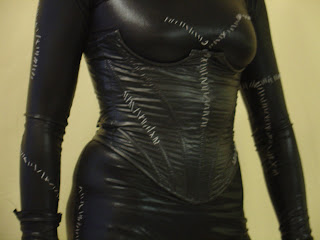 I wanted to make a Catwoman costume from the moment I saw advertisements for Batman Returns. The first attempt for the costume was in 4th grade when my mom bought me a black cat costume from one of those crappy Halloween stores that’s open for 40 days a year at the local mall. The entire thing was made out of polyester and the seams were falling apart from the moment I opened the package. I needed white fabric paint to replicate the stitches, but for some reason the fabric paint I had did not come in usual small squeeze bottle with the easy-to-apply tip, instead it was a fat cumbersome bottle with a wide opening. Needless to say the painted-on stitches were a mess and the whole costume looked like a giant polyester sack with white goo spots. The days before the big Halloween party at my elementary school I had a nightmare that a girl I didn’t particularly like attended the party in the officially licensed expensive costume that looked oh-so-close to the movie. Days later, the party came, and that is exactly what happened; I fought back tears as I ran to the bathroom to try and safety pin the crotch of my costume back together. I think it was at that moment that I was determined to have only better quality costumes from then on.

The next attempt was in 7th grade as I took an old turtleneck and stretch pants and hand-embroidered stitches all over it, including spelling out “cat woman” because I was annoyed at people never knowing who I was when I went trick-or-treating, and yes, I went out getting candy from strangers until I was about 16! (I heart candy) I made the mask out of an old executioner’s mask I found in a box of old Halloween costumes in my attic. I cut the tips off of old knit winter gloves, embroidered them, and wore plastic black claws that slipped around my fingertips. I topped off the whole thing with plain black sneakers and had one of the warmest and most comfortable Halloween costumes I’d ever worn. I reused that particular version of the costume (with added leg and arm extensions to accommodate my growth spurt) again in high school.

During college I was determined to make the actual costume of my dreams. I was able to purchase the black shiny polyurethane coated spandex in the garment district on one of the last days of my hellish internship. My usual fabric sources were limited to retail-chain craft suppliers that sometimes come in handy- but generally do not have the specialty fabrics I require.

The corset I had actually made several months before the bodysuit, because by this point I had more experience with corsets than bodysuits. I found some faux leather from a local source, and actually made two corsets, because I was so pleased with the first one, I couldn’t bear to embroider it and limit it to just being used for the costume. At this point in generating costumes I was still over-buying fabric by a lot so there was no issue in loss of materials. I used an actual bustier for a starting point while making the pattern. The difficulties I were caused more by the fabric that the design itself. The vinyl that I was using was flannel backed, but because of the thickness would not feed through the sewing machine smoothly. I had to do a lot of testing before I was able to find away to get it through the machine, and even then it was not easy. Also, I could not pin the vinyl while sewing because it would leave unwanted holes, so I had to use tape. Normally I would line a corset, but the vinyl was so think and stubborn that I didn’t bother. The corset has survived a several years and it has not required any repair. I did run into a problem with loss of material came at the last step of the corset, attaching the eyelets. I had been buying Dritz eyelets that came in “fashion colors” (fancy way of saying every color in rainbow) but of course the company discontinued that item and Catwoman ended up being short a few black eyelets for the corset, and some purple and blue ones needed to be painted to make up for it. I ended up using an old shoelace to lace the corset, since it’s durable and easy to lace.

The bodysuit was a greater challenge than I anticipated. After finishing the corset I made a mock bodysuit out of scrap fabric and tried to prep that pattern (made from commercial separates) the best I could. Months later I was out of my typical workroom set up, instead working in a sweaty room in an uneven, crooked sublet above an Italian deli in . I was working at a fastener warehouse during the day and sewing in a hot room at night. My tilted room was small so with my bedroll shoved out of the way, there was room to spread the good fabric all over the floor. Unfortunately I had not practiced installing the zipper or the high neckline on the mock version so I hit a wall when it came time to accomplish those tasks on the good fabric. If my arms bent the other direction, it would have been smoother installation process. I swear I was even dreaming about possible solutions. In the end the back got a little stretched where the zipper goes, but it functions. I learned that it is important to make the mock up with all the notions and details.

The mask was no treat either, but I managed. The good thing about particular style of Catwoman is the costume lends itself to a “loose style” (that means messy). After the bodysuit, and the mask was complete it was time for the fun part, the hand embroidering, I joyfully did this while sitting on my sleeping bag listening to the radio trying to beat the heat. I had barely enough fabric to complete the whole ensemble, one of the gloves is actually smaller than the other, but again that “loose” style makes it work. One cannot even tell when the whole thing is on. The whip I got at an adult shop, and the boots I got from eBay, basically the place I turn to for hard to find accessories that I do not plan to make.