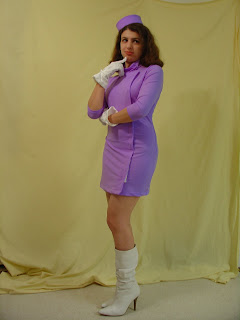 I started the hat in October 2007; I had very little millinery experience at the time. So with some research (thanks to my local library : )) and the help of a great millinery supply website (www.judithm.com) I was on my way. The first pillbox had frame I made was too big, so I had so start over. The hat was made entirely by hand over the course of the entire fall and winter when I got too bored or frustrated with the other aspects of other projects. Most of the information I used to make the hat came from vintagesewing.info which was just excellent for vintage pattern information, and I’m sure I will be using them again in future projects.

The gloves are made out of white garbardine, which was a poor choice of fabric because it frays and gets caught on everything, but now I know that. All of these costumes have been very valuable learning experiences, its just frustrating sometimes after putting in so much time on something like gloves, only to have the fabric giving out after one wearing, but that’s how I learn! I was also planning to make Dr. Girlfriends’s purse (again, lovely to have a place to carry things!) out of the same fabric from scratch, when I came across a purse at a garage sale that was the perfect shape and size. So I just covered that purse in the fabric. I was able to glue most of it, and was happy with the results.

The dress I originally had planned for this lavender cotton fabric I had in my possession for years. But her dress is very form fitting and the woven cotton was not hugging the way I desired, also it was a little too thin and cheap looking. So I went back to my old friend in the garment district for some nylon spandex. It was difficult to get the closure and the collar on this dress just right, again a lot of that difficulty stems from fitting on my own body, but I am happy with the end result. I put white pearl shank buttons on the outside of the dress, and gloves, while the dress is really held on with snap tape. The white boots came from….can you guess…..ebay of course. They were not exactly what I had in mind, but I decided that it was similar enough, and definitely something that Dr. Girlfriend herself would not mind wearing.