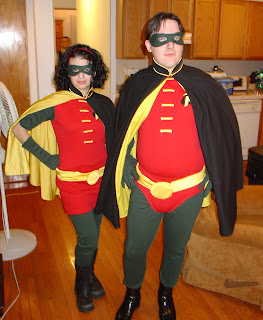 This past year Peat and I were invited to a Brooklyn Halloween party, where we would get to see many of our dear friends. We, of course, decided to go, but that left a big question. What to wear? Peat has always been a fan of Robin, in his many forms, but I am not. But he's beginning to grow on me. Also, I could not resist going in couple's costumes, and making two of the same thing essentially would simplify things for me.

I began with the capes, deciding to use the full-circle skirt approach. I had a lot of black and yellow spandex that I had purchased last year in NYC's garment district. (Who can pass up a fabric bargain?) Even using fabric that was 60" across I had some trouble being able to get Peat's cape out of it. I had to divide his cape into a bunch of pie shaped wedges and then sew it all back together. Since I am small, my cape was able to be cut out in one piece. I had ba 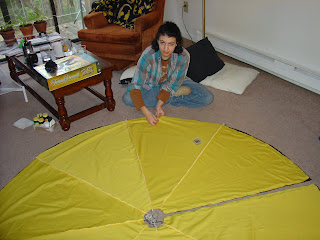 rely enough space in my living room to spread out Peat's cape on the floor, as you can see.

I made the piping for the collar of the cape and the belts. The most difficult part I found about the cape was how to keep it on without choking, as it is pretty heavy, and a lot of weight to put on one little hook and eye. It did not turn out to be a problem, and Peat was not strangled to death by his cape, so it was a success. 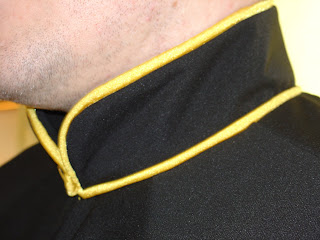 To make the "R" symbol, I enlarged it on the computer, then used interfacing to stiffen each piece, and appliqued it onto the top of the garment on my trusty sewing machine. I was very happy with the results, and now I am all about applique. I'm looking for any excuse to use it as often as possible. 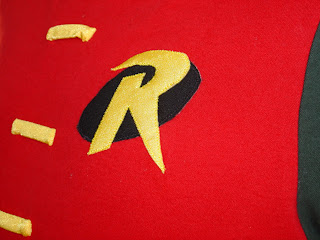 Making the underpants or briefs, was fairly simple, and I'll admit there was a lot of giggling. I have gotten into this bad habit where I like to make my pattern right on the fabric, and adjust when I do the fittings. I think this is a bad habit because I don't have a paper pattern for later, but really, how many patterns can I hold on to. I'm also bad at marking every single change on the paper pattern. So anyway, fitting the underpants caused lots of giggling. I don't care if he's my husband, 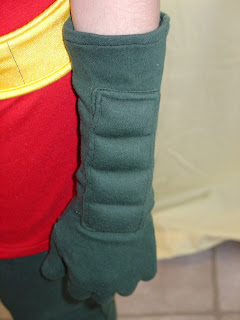 I had more trouble with the gloves because there was this raised quilt-like detail on them, and I ended up making Peat two left gloves, so he aided me greatly in ripping out a lot of stitches.

Another annoyance for me: eyemasks. They are small, there's not a lot to them, but I don't particularly love making them.

The last thing I made was the utility belts. I wanted to make them with two pockets that closed with invisible zippers, so we could carry our cellphones, or maybe some money. But by this point in the project I was fried. I was working on this, late after working all day, and sometimes I just was not able to think clearly. I wanted more piping, interfacing and linings, and it just turned into a big mess and jamming the sewing machine. The important thing was the belts looked how they were supposed to. It was unfortunate that we could not carry our phones, but that would have been a b 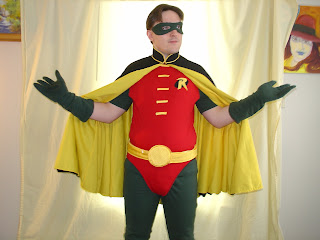 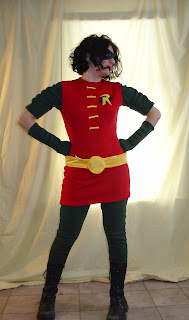