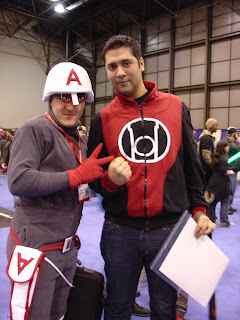 Saturday: The Main Event
After battling our way out of the hotel with extremely sluggish elevators Shadowcat, and The Action Man rolled into the Javits Center just about opening. We checked our coats and floated onto the main floor in record time. As opposed to last year with the several hour line up, getting dressed while on that line and running around like lost little children. By now, we were pros. We had a lot of panels planned to see this day, so we modeled our way around the main floor while we had the time. We attended the 'how not to break into comics' panel, not so sure why I went to this one, but I guess I'm a sucker for learning random things. The panels rooms were much much larger than last year, I guess some planners learned a lesson. I was a little disappointed that we were sharing the space with the 'Travel Show', boy were those attendees confused and upset when they ventured to the wrong side of the concourse. (Picture guy in a business suit getting poked in the butt with a giant foam katana, or harassed by a Storm Trooper- no I didn't actually witness such a thing, but it would have been great) I feel like I spent the majority of Saturday in the basement on lines for panels- oh wait, that's because I did. I guess it goes with the territory, but if one wants to attend the most popular panels one must be ready to sacrifice most of their day. Which kind of sucks, but no one seems to have invented a 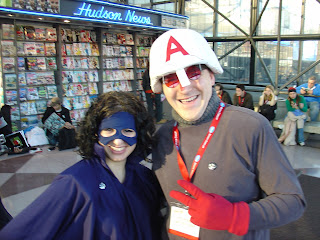 better way yet. Eventually we ran into Mario, showing off his latest anigswes- the Red Lantern jacket he requested. I'm pleased with the way it turned out, and I think it looks great on him.


I spent an hour or so waiting for Robot Chicken, when that finally got underway, the room was stuffed. People were standing in the back and along the walls. Attending by myself I was able to snag a single seat on the aisle. I was still a mile and a half away from the panelists, but at least I was not behind one of the massive stone pillars that apparently held the ceiling up. In attendance was probably the best costume I've ever seen. The mad scientist from the opening of Robot Chicken, complete with a- yes, you guessed it- an actual robot chicken that moved and had a lite up eyeball and everything. It was so cool. I was glad the person was noticed and called up by Seth Green for a photo and some accommodation. It was astounding. Seth Green was making a video for the absent Matt Senreich, which the whole crowd greeted in a very "A.A." manner, "Hi Matt". But that explained why I saw Seth Green earlier that day on the floor walking backward filming, I don't know what. I just remember hearing a familiar voice, and there he was. So there's slim chance that I, as Shadowcat am in the background of the frame waving frantically like some colossal dork. Well, as king of the dorks he should be ready for such behavoir. The Robot Chicken panel, while somewhat unorganized and seemingly without point to the panelists, was still worth the wait. They (Seth Green, Breckin Meyer, and some other writers and producers that I don't remember the names of) answered questions and carried on, were entertaining. I also learned some interesting facts about how the show is made. The theme seemed to be that it was slow, costly, and generally ended in the destruction of the toys used. They closed with a clip of some new material, which was screamingly funny and somewhat offensive. Just want the fans wanted.

The panel that you would be sure to wait for was The Venture Brothers Panel. It started late, 6:45pm, but we knew we had to line up early. We were hanging out on the concourse having some lunch and taking advantage of some breathing room when we saw Doc and Jackson heading outside. I waved to them, Doc gave a weary, 'oh no, I've been spotted' look, and Jackson didn't even look up. They were outside smoking with this big guy who attended the panel who was later introduced as someone who helps make Metalocalypse.

Just before 4:30pm we queued up for the VB panel and there was already a good 50+ people already there. It was going to be a long night. Also, as always, the costume contest time completely conflicted with the Venture panel. I would like to enter one of those some time. This panel was in the same narrow and deep room that held the Robot Chicken panel. Last years' room was very wide, and I felt like there was a greater number of pretty good seats, rather than this year. We were only like half-way back, but still felt miles away. They didn't have a new season sneak preview reel like last year, so that excitement was not the same. Also, the method of asking questions was different, there was a microphone on one side of the room, and everyone just had to bolt to it and hope for the best. Strange questions, like could God beat up Brock? But Doc Hammer answered them with greatly entertaining results. His answers area always this strange fast, stream of conscious wackiness, that is often hysterical. Apparently Jackson was not feeling well, and did not say much, but did grace us with a Dr. Henry Killinger performance.
A former Triana from last year mentioned her past, and asked out Michael S., which somehow tripped Doc's memory about someone asking someone to marry someone. It seemed he had the story a little mixed up. I can't remember who corrected who, because by that point Peat and I are on our feet screaming that "It was us! We're the crazy people!" Doc seemed annoyed that I was Shadowcat, and not some Venture character, but there's no law that says I have to be a Venture character- and besides there's a limited number of females. I didn't want to be one of the 20 Dr. the Mrs. Monarchs that I was fairly sure would be there. We really lucked out last year that there was no other monarchs last year, I don't know how that happened. But Peat assured me, that we would probably never be that lucky again. So far, I think he was right.

I had seen a Monarch throughout the day, but the VB panel is the place to see the whole group. It was great. As I said, severl Monarchs and Dr. the Mrs., Speedy (!), both male and female Dr. Henry Killingers (!!), girl Hank and Dean, a Col. Gentleman, henchmen, and of course, my very own Action Man. Unfortunatly we were seated too far back in order to be able to make it into the line for the signings. Well, the problem seemed to be that they politely asked everyone to stay seated, and would pull people into the line.......but very few remained in their seats. Yes, I'm talking about line cutters! Saw a lot of that, and you know who you are!

Sigh, we got to meet them last year, so I hope that a lot of new people got their turn this year. I wish I had gotten more photos of the other VB cosplayers that were there......until the next con then!
Posted by anigswes at 11:06 AM