Sheep & Wool Festival: Learning to Use a Drop Spindle

Geez- I can't believe it's October already!! Both hurray (I'm special) and boo-hoo (getting older) for my upcoming birthday.
Spent the first Saturday of this month at the Sheep & Wool Festival  about 90 minute drive. 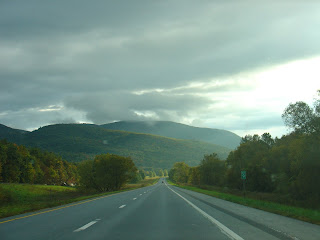 The Journey to Tunbridge:
Quite frankly the day started off a little bit stupid. I got in the car early in the morning after not driving it all week- I notice a sensor is trying to tell me something. Hoping nothing is wrong with the new car I look in the manual to see it means the tire pressure is low. Cool, I didn't know it could do that. No problem right, I'm coming to an intersection with several gas stations, I will just "air up" there.
Nope. One station is closed, the others do not have air.
I drive a lot further then stop where I am certain there is a Stewarts (who I always know has free air). The lot was fairly packed, and I had to park kind of strangely. Turns out the tire pressure was very low, and somewhere scrambling around on the ground, with several people watching, getting their coffee etc, I notice a stain on my jeans. I look at my thigh just above my knee, what is that? Transmission fluid? Motor oil? Then I notice my hands are covered too......it appears to be blood. But where is it coming from? I try to re-coil the hose best I can without bleeding all over the place and go inside to wash off, and find a tiny cut on my finger that is gushing like crazy. After purchasing some band-aids I continue on my journey and arrive to my class on time. Only to have to sit through this class, holding my work in my blood smeared lap- I'm quite certain I looked awesome.


The Class:
I went to this festival to take a class on how to spin yarn using a drop spindle. Since I am obsessed with textiles, fabric, anything to do with methods of making clothing, I have been curious about spinning. Even if it is a process that I know I am not going to do on a regular basis, I still feel good to learn how it is done- and the best way to do that is to do it yourself.
So here I am, spinning wheels are awesome, and they look really cool, but they are also generally expensive and heavy.


For those of you that do not know this is a drop spindle: 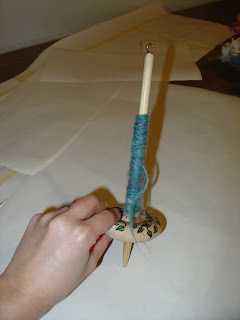 There are many, many different varieties, but the point of it is that there is a spindle and whorl at some location on that spindle. This tool exists all over the world, and differs slightly from region to region.  This particular one is a bottom whorl, and has a nice little hook on the top to help hold the yarn, some have little carved grooves instead.


I purchased mine several years ago on Ebay, and had not been able to figure out how to use it. I didn't even have any clue what it was supposed to look like in action- so I was very excited to get to this class.
Well, turns out, it is an extremely simple tool- but mastering it is another story. You start with a handful of roving (the wool that is processed to look like cotton candy) 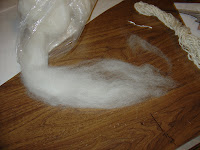 and attach it to the "leader" (this is the piece of roving that you already started spinning just to attach it to the spindle). So you hold onto the leader and the new roving, then you let your spindle spin, as this is happening you feed the new roving between your fingers and it is turned into yarn. Your yarn will be thick or thin, even or bumpy depending on how much roving you allow into the spinning portion. This is the whole tricky part.

So this is kind of what it looks like while you are doing it. There was a lot of giggling and dropping of the spindles during the class- most people were really into it and were concentrating very hard. It looks so easy, but it is super challenging to keep the yarn even. I could get a decent spin going, but then it was too thick- or the roving got all tangled up in the spindle. Or- once you think you are getting somewhere, or yea look a my fine gossamer-like thread- only to realize it way too thin and breaks, sending your spindle to the floor with the defeated telltale noise that you're not doing so well. I got a little too into it- I was giving myself muscular cramps from sitting over this thing like some demented gargoyle in the church basement, talking to my roving and spindle- until of course my spindle broke: 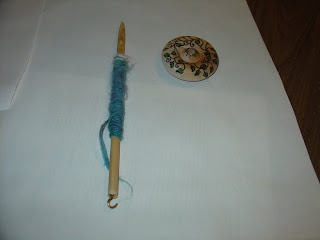 OK- so don't worry, it's fixable- I have wood glue! And the teacher had dozens of beautiful spindles for us to try out. But again, it added to the foolishness of the day- I guess the spindle was a little upset at being neglected and packed in a box for the past five years....
I did get to learn what I wanted, and got to see more wool than I have ever wanted to. I don't really even like wool (itchy!), so it was a little strange to be all but engulfed by it.
After the class I went to check out the rest of the festival. There were lots of the animals where we get our fiber from; angora rabbits, cashmere goats, sheep, llamas, and many varieties of all. What I found most fascinating was watching the demonstrations. Actually seeing people use the spinning wheel (they are just so cool!) though I do not think they would be significantly easier to use- and there are so many new collapsible models now- it is nice to see arts that are so ancient being modernized without straying from original purpose.  I also got to see rug-making, and several different kinds of weaving looms- the best was the bobbin lace maker. It is so small and looks so incredibly complex to work with- I bet that it is not as complex as it looks, but it is still an impressive sight.
Since I am utterly fascinated with this kind of crafting, I was so happy to see real live people doing it- usually I am just reading about it somewhere, wondering, "who on earth would do that?" Well, now I've got my answer.
So while the journey was bloody, the morning frustrating, and the afternoon soggy, I did have a good day, and even have something to show for all my trials..... 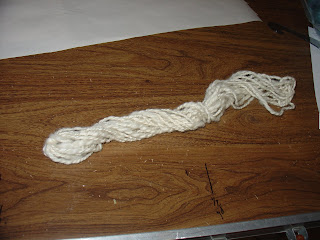 A tiny skein of yarn, that I spun myself.
OK- it's not pretty- but it's mine!
Posted by anigswes at 9:57 PM