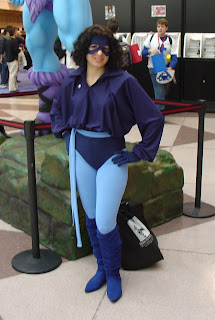 
I first began to work on the gloves and underpants, as I had the navy spandex laying around from a previous project, and I got it very cheap because it was damaged fabric. There were some striations and inconsistencies in the color, but I was able to work around it for Shadowcat because it required little pieces. The gloves were simple, because it was super-stretchy spandex that I could trace my hand on the spandex and go from there. The bigger challenge was using a seam that would stretch enough to accomodate me to actually get my hand into the glove. Some tinkering with stitch setting fixed this.

Next, I made the underpants, which were more like overpants if you think about it. Luckily, I had an old bikini pattern in my stash that I was able to utilize. I just needed to raise the waistband, several inches. Part of the charm and hilarity of this costume was that everything was worn at the "natural" waistline, whereas I am used to wearing things a good 4" below that!

In the meantime I was scouting the internet for my legging fabric, and boots. I had it all planned, but I was just making sure of the color, and best prices. While waiting for these things to arrive I began working on the mask, and you know how I feel about masks! I began by measuring my face, making a paper pattern, and adjusting it accordingly.

Finally, I decided to make it as a bat-wing sleeved blouse. The fabric was wide enough, and I was small enough, that I could cut out the entire blouse in one-piece. The only seam would be that of the underam/side seam. I then made the large stand-up collar, and the facing for the collar and the v-neck. Then I gathered the sleeve openings and added the cuff made out of spandex. Then I gathered the waist, and attached the waistband, also spandex. The last touch to the blouse was sewing in the shoulder pads. It was against type to put shoulder pads where there was no sleeve seam, but in the end it gave the effect that I wanted.

When my light blue lycra arrived I made the leggings. I have a commerical pattern that I use as a sloper for my other close-fitting spandex outfits. I made the leggings a tiny bit smaller, as then needed to be more leggings, than pants, and also needed to raise the waistband, otherwise I would get the dreaded lines through the overpants. Then I made the sash from the pant scrap. I made it very long, so it could wrap around my waist twice, and then hang down to my knees.

After all these were finished, I had to go back and finish my mask. It is double layered, with extra facing at the eye-holes. It is held on with clear elastic hidden by my hair. I used to have the perfect long brown (and big) Kitty Pryde hair, but I did not feel it was necessary to wear a wig.

It was fun to make, and even more fun to wear at the NYCC this year. I also did myself a huge favor by wearing boots with only 1" heel.
Posted by anigswes at 11:01 AM