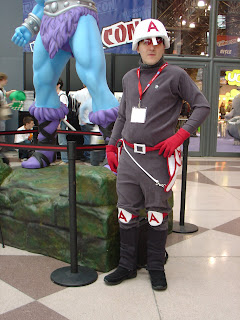 My dear husband decided only a few short weeks before, that he would like to be The Action Man, for New York Comic Con. We just moved in the beginning of January, so he questioned if I would be able to finish all three outfits for the Con, taking place in early February. I just assured him that all would be finished, but he just needed to decide who he wanted to be, preferably someone simple. After unpacking his black army helmet, the decision was made.


I began with the many accessories. The gloves, the belt, the A's. I appliqued th 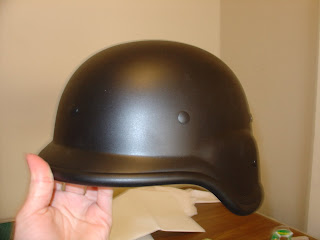 e A's to the kneepads. I white spandex leftover from Rorschach mask, so I used it up here. I stabilized and thickened the kneepads with fusible fleece, and covered elastic to hold them on the leg with the red interlock.

The holsters were also white spandex, I used a commercial pattern as a starting point. I enlarged the flap to close the holster, and added in an extra piece of fabric to give the holster more dimension. I appliqued the A's on the flap, added a velcro closure, and sewed the lining to the outside by sewing on the red bias tape. I made large buttonholes on the holsters so the belt can lace through them. I used swivel hooks, d-rings and spandex 'straps' to make the cross straps on the holsters.

I made what looked like a giant shower cap to cover the helmet. I appliued the "A" and embroidered the eyebrows and other details. I used fusible fleece to pad the inside of the helmet, and it also gave me something to sew the outside cover to. I made the fabric pocket, with cardboard inside for the nose guard. I purchased red sunglasses with round frames for the lenses. I cut off the arms, and attached the lenses by sewing the bridge to the nose guard and suspending them from the helmet to the hinge of the glasses.

The top and pants were pretty simple, I just patterned the pants after some of my husband's sweatpants, complete with pockets. The top I used one of his sweaters for the pattern. I added in some double-thick shoulder pads for that extra action look. Lastly I knitted a separate piece for the neckband. I really wanted to use a rib fabric for this part of the costume, but was unable to find such a small amount of a fabric with the right amount of stretch, or the right color. Finding the right color yarn was a challenage as well, but it was as close as I could find. I knit a simple rib, and sewed in onto the moleskin. I then added a zipper to be sure he would be able to get in and out of it easily.

Luckily hubby had some nice black snow boots, but they were not quite high enough from action man. I simply made boot covers with stirrups that were a little bit padded with fusible fleece, and were held on with velcro.

That finished off one of the most comfortable (and warm) costumes I've made so far. Too bad he still could not see very well......there's always a challenge!
Posted by anigswes at 11:40 AM