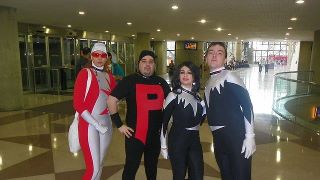 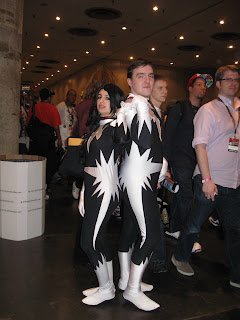 Our next Xmas card photo.

See?  My blogging has slacked for good reason, I was busy getting all this and Super Sox ready for unveiling! 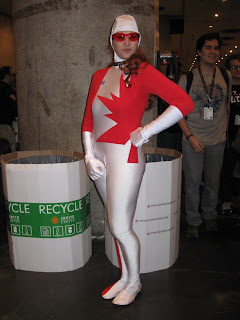 This was a special Comic Con for me, as we had a group of people for me to dress, so it was kind of a reunion among friends!
Yea, yea, yea that's not what you want to hear about.
Highlights:
I bought some plushie intestines at I Heart Guts, I just dare you to take a look at their website and resist owning some hilariously adorable parts of biology.


Got to have a word with both Tim Sale and Jeph Loeb, though Loeb asked if Northstar and I were going to do some sort of choreographed ice skate routine. Guess he didn't exactly appreciate our costumes......quite frankly it seemed like an odd thing to say, it's Comic Con! And we were hardly the strangest group there by a long shot. 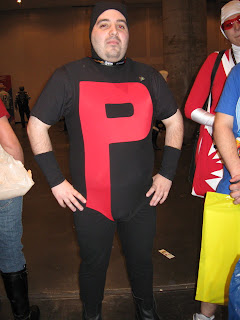 We missed being in the daily costume contest, which was unfortunate, but just another example of how crowded each event is. Lining up early is a necessity and you need to pick your events carefully! I haven't seen the attendance numbers yet, but it seemed a lot more crowded to me. 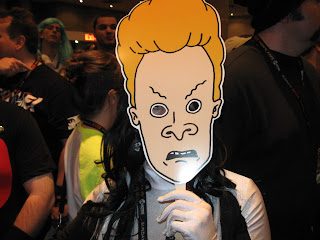 Guess what other panel we attended?? Uh, that's right Beavis. I also got a free shirt. While the Robot Chicken panel was in true Comic Con ADD uber-energy, Mike Judge's panel had a dose of west coast ease. The energy in there was seriously the opposite of the rest of the con. I suppose it was a good way to end our trip. Special guest Luke Wilson added to the "calming" attitude. But don't get me wrong, we got to see the first episode of the new B & B and it was F***ing funny.


Alright, here's a not-so-great video of the EL wire on our costumes.
Apologies for my blathering and the background noise.