Exclamation Point- because these were more difficult than I thought, and I am thrilled that they are completed! 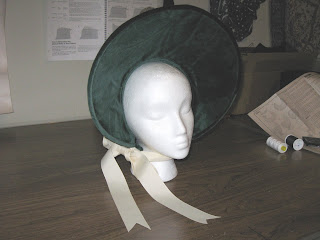 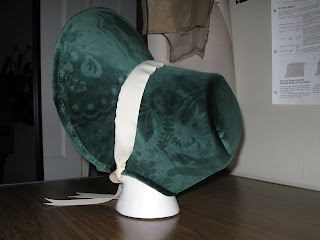 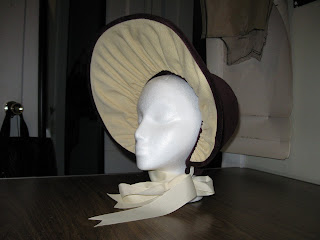 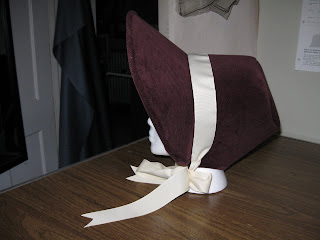 So, how did I do it? I used Simplicity pattern 4851 that seems to be out of print, that I borrowed from a friend. It has all the ladies garments that I made for the show. 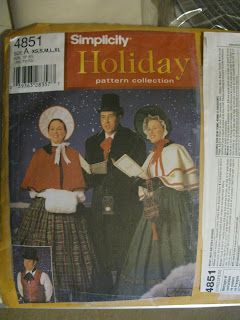 We start with the pieces. This is the back part of the bonnet. The entire crown is has a thick piece of Pellon  is sandwiched between the fabric and the lining to give greater stability. Even though the pattern did not call for lining I decided to do so because I thought it would be nicer than wearing the Pellon interfacing directly on one's head. 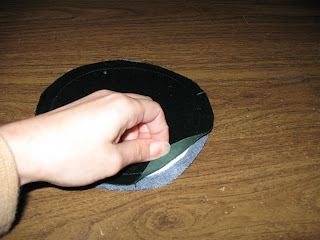 This is the other part of the crown, also interfaced with pelon and cut on the bias.All of the edges that are not in a seam are finished with bias tape. 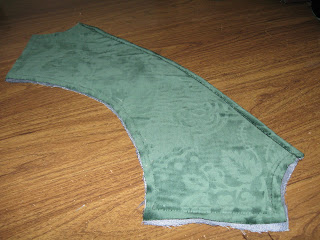 I was having trouble keeping all the layers even and smooth so I used some spray glue for a temporary bond until things were stitched. Here the crown pieces have been stitched together. With all the layers everything was so thick yet small, making it very difficult to shove everything under the machine. Shoving also does not make for nice sewing so this is where I began to stitch by hand. 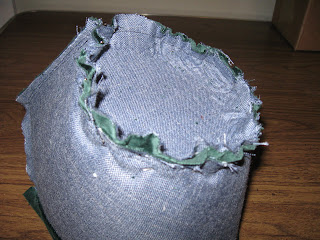 Even though there is lining, the inside of the crown was still shaping up to be an ugly, frayed mess, so I decided to bind the seams. 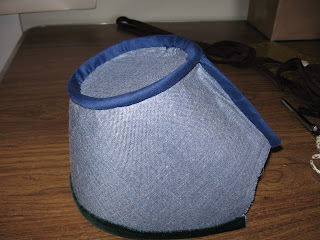 Doesn't that look better? I actually used what little purchased bias tape I had laying around, because I knew these parts would not be visible while wearing- but now that I am putting them on display! Anyway, after the seams were bound, the remainder of the raw edges that would be exposed needed to be finished with bias tape.

I cut my bias strips out of the same fabric as the bonnets and made plenty of tape. I really heart my bias tape maker and can't say enough about it! 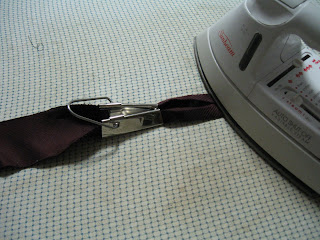 Next, I put the crown section aside and work on the brim. 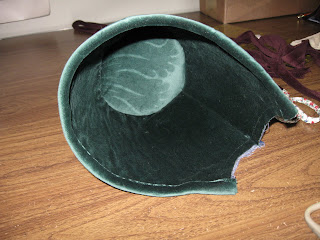 One brim is self lined, and this is the other that has a contrast lining that is gathered on the inside. 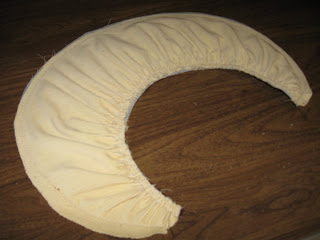 Inside both brims is a piece of buckram, to keep them nice and stiff. 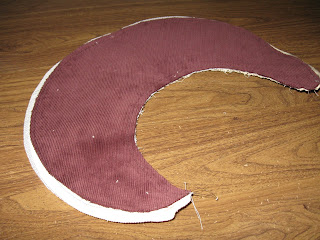 After basting the brim lining to the fabric, through the buckram, I stitched another piece of bias tape around the outer edge of the brim. I placed a 19gauge covered milliner wire around the brim, and stitched in place by hand. I of course bent the edges back to make sure nothing would poke through later on. 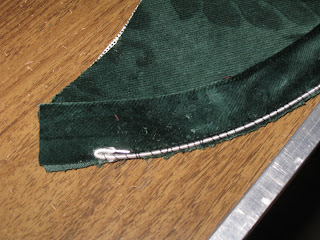 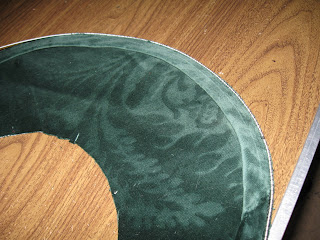 I then flipped the bias tape over the wire to the outside of the brim (it's actually the outside, but seen less, the lining is much more prominent as it frames the face). I stitched the bias tape in place hiding the wire. Then bias tape was applied to the inner edge of the brim.
So here I  had the crown and the brim as two separate pieces, all edges covered in bias tape- ready to be assembled. In this photo the pieces are just pinned, and stay together for the second it took me to get the shot. This part was a lot more difficult than I anticipated. Because of all the layers, it was difficult to pin things exactly in the place they were going to be stitched, also I had to make sure where each stitch was being placed on both sides. It's the kind of work that makes you wish you had a third hand. At first I just started stitching at one side, but when I finished at the opposite end I had run out of brim! So, I tore it all out, maker the centers and quarters, and started from the center and stitched to one edge instead. It was easier to ensure that things lined up much better. I was still very glad there only needed to be two of these! Well, now that I have finished it, it doesn't seem so bad......but now the whole process is clarified to me. 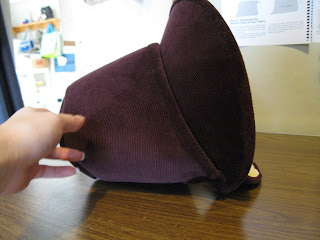 The last step was to hand-stitch the ribbon just over the seam where the crown joins the brim. Not only is it pretty, it hold the bonnet one's head. I purchased the width of ribbon specified by the pattern, but I think I would have rather had something a little bit thinner. No matter. It's fun to make things like this, things that I would never think to make on my own. It helps to challenge me, and forces me to finish an otherwise strange project, all while allowing me to dabble in hat-making, which I hope to do more in the future.
Posted by anigswes at 10:03 PM

Labels: a christmas carol, how to make bonnets, poultney