More than just a seamstress.
Behold the arrival of our new cat, perhaps my new sewing assistant-Cassidy (Proinsias to you Ennis fans) 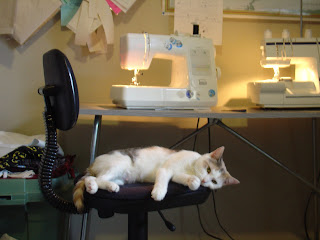 After her initial introduction to the house it was clear she needed something to scratch and play on other than our new couch. Just look at the price of those scratching posts and cat jungle gyms- outrageous! Hubby turned to me in the local Petco, and said "You could build one", and that was all I needed. Between his confidence in me, and some construction information in my Country Wisdom & Know-How book- (thanks again Dan!) I was off to Home Depot to torture some poor sales guy. Ha, poor sales guy, after we got some fasteners and were trying to get the wood cut- he turned to me and said, "Do you have a husband or something at home to put this together for you?" Whoo- go chauvinism!

Back at home- I began my assembly. Since I do not have an electric saw yet, I had that nice old guy cut everything for me at the shop. I glued the pieces that were to be the posts together to make sure the posts would be nice thick support pieces for scratching, climbing, and holding up a "cat seat". See, all my fashion texts have dual purposes: 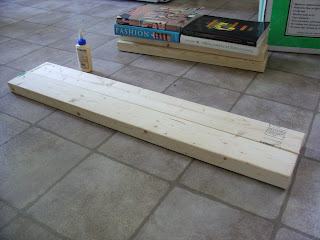 After gluing, I noticed one of the pieces was not cut properly. To make sure that everything would fit better, I sawed off this little uneven spot. I had to use my little $8 hand saw- it takes awhile, and is difficult to cut straight, but it was better to even this out. 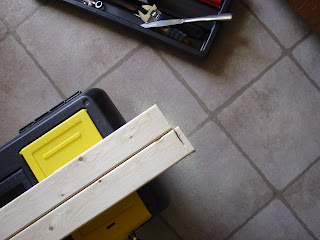 Next, using more glue, and some brackets, and screws- I love my new drill! I put up the posts. 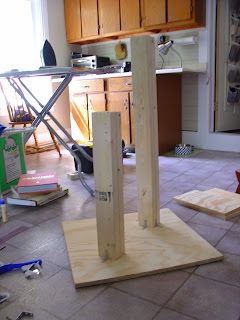 After attaching the top "cat seats" I dragged this whole mess outside to begin wrapping the posts with sisal rope. I was using this ultra-toxic contact cement which needs plenty of ventilation to use it. Of course I realized I was going to run out of rope very soon, so I ran to my local TruValue to be ready to finish. But of course it was cold and rainy for about the next three days- which frustrated me as I had to put the whole thing on hold, after covering everything in plastic. 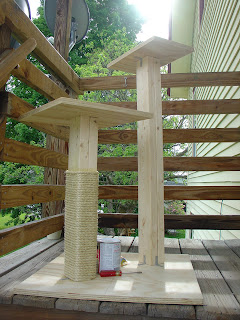 Here is a photo of the finished cat dreamland. Attaching the carpet was a lot more annoying that I thought it was going to be. I tried to staple it, but didn't have large enough staples- also I had barely enough carpet to wrap around all the edges. I went to a local carpet store, and batted my lashes and asked for some scrap carpet for me and my cute new kitty- and what do you know I got it for free! Which was really good, because if I had to pay for the rug too- it may have screwed the whole 'making it yourself will be cheaper thing'. 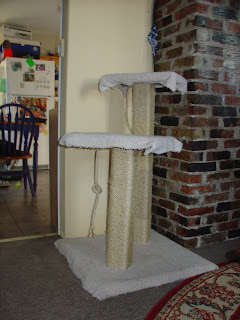 It took some baiting, but Catsiddy finally got on her scratcher- with some prompting from hubby. A few days later she actually started climbing and scratching it on her own. It's amazing, now she uses it everyday, and seems to have lost interest in clawing the couch! (whew!) 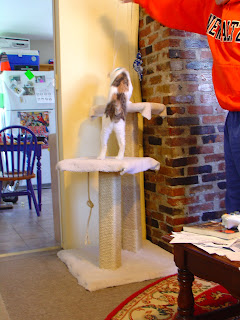 Okay- one more cat ancedote- because this is a weird one. One of my favorite things about having a cat is how hysterically ingenious they are. Last week we were hanging in the kitchen, I was doing the dishes, and Catsiddy was posted at one of her windows watching "cat tv" that is- the birds outside. Eventually she made off toward the bedroom. Later, I went to see what she was up to- but I couldn't find her. She wasn't in one of the window sills. She wasn't behind the blinds of the second window. She wasn't one of the bulges in the blankets on our unmade bed- ohhh, she must have been under the bed. I got down on the floor- still no cat. I'm looking around at the bookshelf now, still nothing- but now I hear the jingling of her collar. Am I going crazy? Where is she? I look under the bed again when I see something move- Well let me put this another way, I see something in the bed move. She was inside the box spring...... 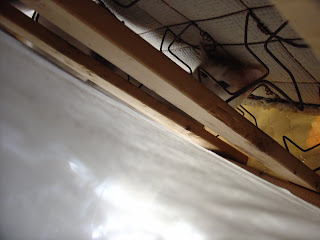